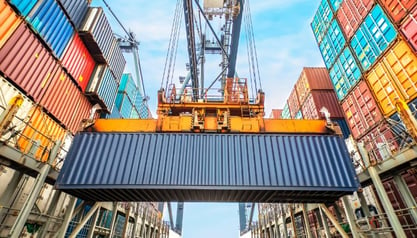 The large steel shipping container came into existence as an evolutionary step in ocean freight to reduce costs and improve speed, but it ended up revolutionizing the global economy.

Intermodal Container - One of the greatest inventions that is often overlooked and under appreciated for its impact on the global economy.

Up until the 1950's, most goods transported via water were shipped loose or packaged in boxes, bags, barrels or other relatively small containers based on the commodity... in other words, break bulk shipping.  The major cost in break bulk shipping at the time was time and labor spent loading and unloading the ships at ports.  To put the time and costs into perspective, the cost of loading and unloading was up to 75% of the total shipping costs and the ship could take as long to unload and load as it did in transport over the water.  Just imagine what the process would look like with today's new 18,000 teu mega ships if commodities came into the port in break bulk form.

So, how did we get from 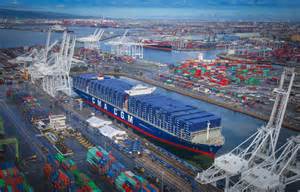 break bulk to where we are today?

Intermodal transportation goes back to the 1700's when coal was moved in coal containers on England's Bridgewather Canal.  By World War I, the Great Eastern Railway was using wooden containers to transport passenger luggage between trains and sailings.

Containerized shipping began to be seen in the USA when the U.S. Military began using 8'6"x6'3"x6"10" metal shipping containers during World War II.  By the 1950's, commercial uses of containerized shipping in the United States were being lead by Malcolm McLean. The concept was simple: use metal shipping containers, similar to those used by the U.S. Military, but in sizes that were larger yet still capable of being transported by truck or train (intermodal).

By the 1960's, intermodal shipping became the preferred method of ocean transport with standardized box sizes, weight and container build & tolerance specs allowed for large scale investment around the standardization that solved the cost and time issues.

As intermodal transportation expanded, so did the thought and practice of setting up manufacturing regionally into the facilities designed to allow easy access for trucks carrying containers, rather than build up facilities in close proximity to ports. 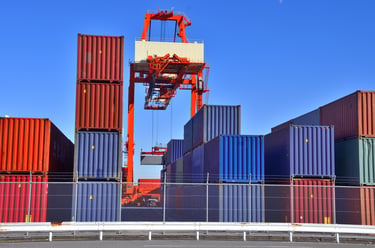 In 1984, intermodal shipping known as 'double-stack rail transport' hit the intermodal scene, making for greater efficiencies. Fast forward to today and intermodal is now considered another mode of shipping, like truckload, LTL and air versus thought of as a cost alternative to trucking freight.  The advent of the 53' domestic container as an alternative to the 53' OTR dry van has helped the transition.

Now with the history behind us, I just wanted to briefly remind everyone that this simple invention revolutionized the world world we live in today by facilitating international commerce and global manufacturing in a way that could have never occurred without the simple rectangular box.  Employment among cities, regions and countries have been impacted, which also plays into the politics and culture of each country across the global to allow for efficiencies, specialization and expertise by region.  So, while the container was intended to cut costs at ports and improve the speed the loading and unloading of goods, it has forever changed the world we live in, and to my dismay, I'm surprised that this invention has not hit many top 10, 25, 50 type lists on the greatest inventions in world history.

For a deeper dive into intermodal, we recommend reading our in-depth article entitled The Completed Guide to Intermodal Transportation, which is comprissed of the following chapters:

As always, thank you again for following our weekly blogs and invite you to review our website.  We look forward to your comments and questions.