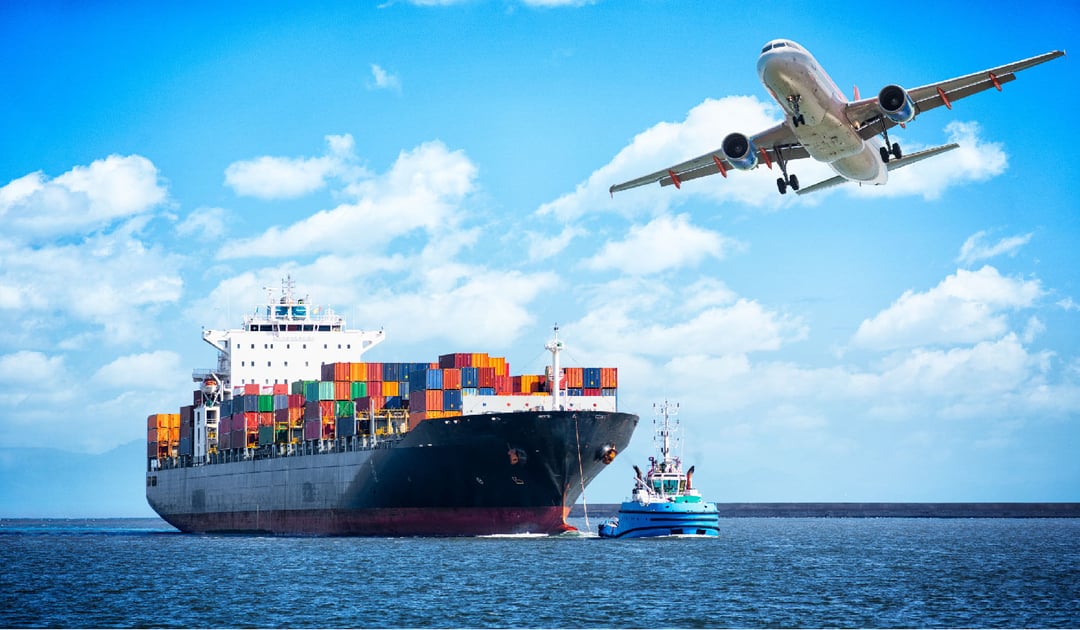 When moving loads overseas, shippers have two options: air freight and ocean freight. And while there are factors like cost and speed to consider when choosing between modes, another key element that should go into shipping strategy is a shipping method's carbon footprint, AKA environmental impact. Comparing air freight vs. ocean freight - or sea freight if you prefer - purely based on carbon footprint reveals that moving cargo by ship offers significant advantages over doing so by plane. Depending on the statistics you cite, long-haul air freight can generate 47 times as much greenhouse gas emissions as ocean freight, per ton-mile. Put another way, airplanes emit 500 grams of CO2 per metric ton of freight per kilometer of transportation, while container ships emit only 10 to 40 grams of CO2 per kilometer. However, the overall environmental impact of air freight versus sea freight is a bit more cloudy.

Are ships better for the environment than planes?

Generally, ships are better for the environment than planes when it comes to freight, though there are complicating factors. First, the two strongest arguments in favor of ocean freight:

Those are pretty cut-and-dried, self-explanatory arguments for ocean shipping. But there are complicating factors. As you may guess, ocean liners release emissions either into or directly over the ocean, and those can contribute directly to ocean acidification. Reliability matters, too, especially for sensitive loads. When it comes to pharmaceuticals, the speed and reliability of air freight makes it less likely to lose product. And when product is lost, the environmental cost of making more can be significantly greater than any emission savings between ocean and air. Perhaps the biggest complicating factor regarding environmental impact is vessel age and technology. Older ocean freighters release approximately five times more emissions than newer ones. Additionally, most ships use among the lowest grades of fuel, called bunker fuel, which has exceptionally high sulfur content. On top of that, older container ships lacked means to block or filter emissions including sulfur dioxide, nitrogen oxide and particulates.

There is good news though. The International Maritime Organization has pledged to reduce carbon emissions by at least 40% by 2030, and at least 70% by 2050. And an IMO rule that went into effect in 2020 placed limits on sulfur content in ship fuel - to 0.5% in fact - and now requires all ocean liners to comply. That limit represents a limit at least seven times lower than what it was previously. Other technology to help with ocean freight's environmental impact includes investigating hydrogen fuel cells, though they are currently still cost-prohibitive. And even going back to an idea that's not as new, some container ships are incorporating sails. On the air side, replacing older planes with newer ones has led to fuel efficiency improvements.

As noted, the best shipping method for the environment does depend a bit on what you're shipping. That's why turning to experts like our team at InTek Freight & Logistics is a good idea. Tell us about your situation & priorities and we can help you decrease the carbon footprint of your shipping. To learn more about freight and logistics, visit our Learning Center. And below, find a few resources to help you learn more about sustainability in supply chains: